The Changing Face of Iceland is a 52-minute film written, directed, and produced by Mark Terry. It is the third in his series of films that examine the polar regions.

The Changing Face of Iceland Trailer

“As one of the most volcanic countries on earth and home to Europe’s largest glacier, Iceland has earned the nickname “Land of Fire and Ice”. However, climate change is impacting these two distinctive features threatening to redefine the geological composition of this Arctic island nation.

Warming temperatures are melting glaciers here, as they are to all ice around the world, but in Iceland, it is at an alarming rate, nearly 150 meters a year! Warming seawater surrounding the shores of Iceland is also contributing to this accelerated decline of inland ice as warm water creeps underneath glacial beds.

The warming North Atlantic is also impacting the eco-system of Iceland: coldwater species of marine life are moving further north while equatorial species are replacing them. Iceland’s bird populations are having trouble adapting to this new diet as their numbers are falling as much as 37% in the past ten years. New populations of Humpback and Minke whales are contributing to this decline in food supply for the birds of Iceland as they are consuming most of the krill and capelin the birds usually eat.

In recent years, baby puffins (pufflings), growing impatient for their parents’ return from hunting expeditions, have begun wandering into towns attracted by the bright lights. They are incapable of returning home causing local people to take them in are raise the chicks themselves.

And while major changes in Iceland’s environment continue to threaten the 340,000 inhabitants here, climate change is also having a positive impact on the economy. In the past five years, tourism – in particular, eco-tourism – has become the number one industry here while the fishing and sale of mackerel – a new fish to these waters – represents the third biggest industry.

This one-hour documentary special from decorated polar explorer and award-winning environmental documentary filmmaker Mark Terry (The Antarctica Challenge, The Polar Explorer), chronicles these changes and more during his 2018 circumnavigation of the island nation.

Will Icelanders welcome the impacts of climate change with open arms or will they flee the land of fire and ice as floods of lava and water make the country uninhabitable?” 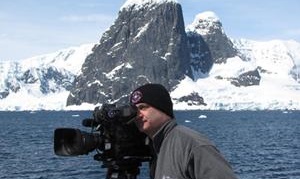